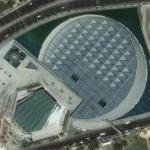 In the following years, local scientists traveled through the region to purchase books for the library. The Library held many copies of important books of the ancient world as well as the originals of Euripides and Sophocles. All human knowledge of the ancient world was stored in the Library, not just of Egypt or the Greek territories, for Ptolemy I sent his representatives throughout the known world to collect reference works.

In 48 BC, the Library and at least 40,000 scrolls were burnt when Julius Caesar attacked the city (during the Alexandrian war) and a huge fire swallowed up the ancient Library. It would seem that this was the end of the fabled library and thus the end of a legend, but 2,000 years later, after 10 years of planning, the Egyptian government and UNESCO have combined their efforts in order to revive the ancient Library. The Alexandria Library has now risen from the ashes of antiquity so that it might once more lead the world as a cultural center and a focal point for knowledge not only in Egypt, bur for the world as a whole.

As part of the library, a new and very important antiquities museum has been created in order to highlight the history of Alexandria across the ages. It specifically highlights the cultural era of the Entrance to the MuseumHellenistic world, providing exhibits related to knowledge and the arts.

The museum was ceremonially opened in January 2003. It now contains rare artifacts from the Pharaonic, Greek, Roman, Coptic and Islamic eras. These artifacts are displayed in chronological order, representing the evolution of writing, the birth of scholarship and librarianship, and the ancient arts with informative displays presenting mosaic, portraits, glassware, pottery, coins, textile and much more.
Links: www.touregypt.net
1,936 views