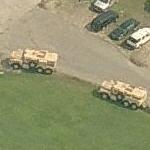 Force Protection, Inc. is the world's leading manufacturer of ballistic- and blast-protected vehicles, which have been used to support armed forces and security personnel in Iraq, Afghanistan, Kosovo and other hot spots around the globe.

Mine Resistant Ambush Protected (MRAP) vehicles are a family of armored fighting vehicles designed to survive IED attacks and ambushes. There is no common MRAP vehicle design; there are several vendors, each with a competing entry. The Marine Corps had planned to replace all HMMWVs in combat zones with MRAP vehicles, although this appears to have changed. On 2007-05-08 Defense Secretary Robert Gates stated that the acquisition of MRAPs are the Department of Defense highest priority.
Links: www.gdls.com, cache.boston.com
750 views