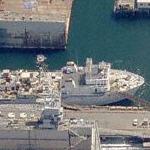 By kjfitz @ 2009-09-02 08:49:56
@ 47.587136, -122.356589
Seattle, Washington (WA), US
Known as “America’s ship for ocean exploration” the NOAA Ship Okeanos Explorer is a new type of research vessel. 95 percent of the ocean is still unexplored—and the Okeanos Explorer is going to help change that. The ship will travel around the globe to map the seafloor and characterize largely unknown areas of the ocean. Interesting seafloor features can be discovered with the deep water multibeam sonar mapping system. Sites will be further explored with the ship’s Remotely Operated Vehicle (ROV), which can travel down to a depth of 6,000 meters. Images and high-definition video from the underwater vehicles will be sent from the vehicle to the ship to the shore in real-time. This technology is referred to as “telepresence.” The ship’s V-SAT, or very small aperture terminal, (housed in the ship’s giant golf-ball dome) is able to send this information through Internet2, a high-speed internet connection commonly used by Universities.

The Okeanos Explorer is the only NOAA ship to have a dedicated ROV. Although ROV’s have been used on other NOAA ships, they are typically removed at the end of a mission. Having a permanent ROV makes it easier to deploy at any time throughout the field season. On the Okeanos Explorer, there is an integrated control room for operating the ROV and run telepresence communication. Having the screens and computers permanently wired to the ship makes it more efficient to sustain long-term exploration in remote areas of the world.
Links: governmentshutdown.noaa.gov
717 views