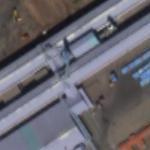 Metal production takes place in two potrooms. Each potroom has 90 pots with prebaked anodes, which are fully hooded and connected to a central fume treatment plant, which cleans the exhaust gas. Overhead manipulator cranes, two in each potroom, tend the pots. The cranes are used to change anodes, tap metal, and fill aluminum fluoride. A dense phase system takes the alumina from the harbour silo to the pots. The pots are equipped with center hoppers incorporating crustbreakers and point feeders from wich alumina and aluminum fluoride are fed. The process in each pot is controlled by the VAW ELAS control system.

Each pot produces up to 1.4 tons of metal per day. The pots are tapped every day and the 960 °C hot metal is transported in crucibles with 8 ton capacity to the metal casting house. There the metal is collected in a 60 ton capacity furnaces. After the metal has reached the optimal temperature for casting the furnace is opened and the metal flows into the casting molds and solidifies as 22 kg aluminum ingots.
Links: www.nordural.is
1,001 views