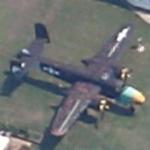 The North American B-25 Mitchell was an American twin-engined medium bomber manufactured by North American Aviation. It was used by many Allied air forces, in every theater of World War II, as well as many other air forces after the war ended, and saw service across four decades.

B-25J Variant - The last production model of the B-25, often called a cross between the B-25C and the B-25H. It had a transparent nose, but many of the delivered aircraft were modified to have a solid nose. Most of its 14–18 machine guns were forward-facing for strafing missions. The RAF received 316 aircraft, which were known as the Mitchell III. (Number made: 4,318.)
Links: en.wikipedia.org
517 views