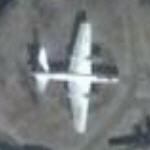 The Tornado saw service for only ten years, from 1948 to 1958 and was meant as a replacement for the World War II B-25s and B-26s of the new Tactical Air Command. The B-45 never saw combat. A different version of the B-45, the RB-45C was used briefly as a reconnaissance aircraft in the early days of the Korean War. 40 B-45Cs were modified to carry nuclear weapons starting in 1950. After 1958, they were relegated to such duties as target tow aircraft, or control aircraft for drones, such as the Kawasaki KAQ-1 Drone also on display at Castle. Most were phased out of service by 1959.

The aircraft on display at Castle Air Museum is the eighth production Tornado built, making it the oldest jet on the Museum grounds. It was used by the U.S. Navy as a drone controller and later as a photographic ground target at the China Lake Weapons Center in California. It was recovered from the China Lake facility in pieces and restored to its present condition at Castle. It has the markings of the 84th Bomb. Squadron, 47th Bomb. Wing.
Links: www.elite.net
680 views