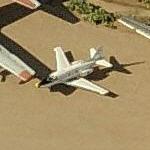 By kjfitz @ 2007-11-18 20:43:20
@ 32.139247, -110.87089
Tucson, Arizona (AZ), US
In 1956 the U.S. Air Force requested proposals for a small jet trainer and transport from aircraft manufacturers. Since the government felt that the aircraft would also have commercial applications it requested that the prototypes be designed and delivered to the Air Force at no cost to the government. North American responded with the Sabreliner, which first flew in September 1958. By 1960, it had been accepted by the Air Force and had received its commercial certification. Both military and civil orders followed with a total of 599 eventually being built.
Links: pimaair.org
484 views