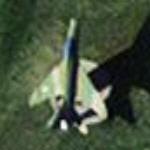 The F-100 was designed originally as a higher performance follow-on to the F-86 air superiority fighter. Adapted as a fighter bomber, the F-100 would be supplanted by the Mach 2 class F-105 Thunderchief for strike missions over North Vietnam. The F-100 flew extensively over South Vietnam as the Air Force's primary close air support jet until replaced by the more efficient subsonic A-7 Corsair II The F-100 also served in several NATO air forces and with other US allies. In its later life, it was often referred to as "the Hun," a shortened version of "one hundred."
570 views