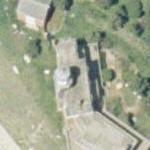 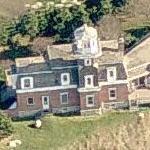 During Prohibition, isolated coastal beaches and islands were often used as transfer points for illegal booze. It was general Knowledge that some of the Maynards, as the residents of nearby Fishers Island were called, were actively partaking in "bootlegging". In April of 1923, the yacht Thelma-Phoebe was engaged in smuggling Scotch when a storm swept it up on the south side of Fishers Island. By the time the Coast Guard had arrived on the scene, most of the vessels cargo had been "liberated" by the locals. In December of the same year, whiskey from another vessel had similarly disappeared when it too was shipwrecked in almost the same spot as the Thelma-Phoebe. It was not surprising, then, that after having reports of "strange lights" in the vicinity of North Dumpling Island, the light station's keeper came under close scrutiny. Keeper Burkhart was said to have been "running extra lights around the lighthouse, which were used as signals between the mainland, boats and Fishers Island". His accuser claimed that he had seen the keeper storing, delivering and selling liquor to the citizens of Fishers Island"and receiving loads from ships at night". Though the Coast Guard did observe a green flair, a rocket, and sky signals from the island's vicinity, investigators never found any evidence that connected the keeper to smuggling activities.

North Dumpling Island, in Fishers Island Sound, has had 5 owners since 1639, with the first change of owners in 1847 when the Winthrop family (descendants of Governor John Winthrop of the Massachusetts Bay Colony) sold the property to the U. S. Government for $600. The red-brick, 2-story lighthouse was constructed in 1849 and used until the beacon was moved to a steel tower and automated in 1959. The light was returned to the tower on the lighthouse in the 1980's, at the request of Mr. Levitt, the fourth owner of the property who oversaw extensive renovations of the house and island. The island’s present owner, Mr. Kamen, who is reputed to have his own Navy and currency, is sometimes referred to as Lord Dumpling II.
Links: dp.g.doubleclick.net
839 views