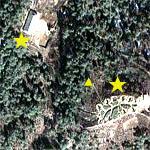 It looks, to me, like those are actually satellite dishes, some possibly in dome shelters. What looks like revetments are actually roads around each piece of equipment. I'm guessing it's a communications facility linked by a fairly well maintained road to the new, well-maintained H-shaped "Eagles Nest"-looking structure just to the northwest. In North Korea such well maintained sites, especially in a remote mountain area, almost always indicate government facilities. (North Koreans don't really spend a lot of time at mountain resorts).

Analogman
@ 2005-10-04 20:02:02
I'll do some research tomorrow at work and see what I can find out about these two sites and the industrial facility in the valley in between.

Analogman
@ 2005-10-05 08:29:54
If there's that many it is likely they are not SAMs but rather AAA sites. I did some checking this morning and the big facility at the bend of the river IS the nuclear fuels processing facility and the associated facilities.

There is a really good unclassified image at Globalsecurity.org, here.

The sites you've found are undoubtedly AAA and some artillery thrown in for good measure.

TexasAndroid
@ 2005-10-05 08:37:07
Sorry. HTML was being abused by comment spammers, and had the potential for even worse mischeif, so it was disabled a while back.

Analogman
@ 2005-10-05 08:38:22
Must be my lucky day. I found another, unclassified satellite image at Global Security showing "A close up of one of the 22 anti-aircraft artillery batteries protecting the Yongbyon Nuclear complex." I looks exactly like the sites in your images.

Looks like you found a whole mess of AAA gun sites.

pdunn
@ 2005-10-05 11:22:15
I guess the reprocessing facility at the bend in the river explains the stream of melted ice eminating from an outlet due east of the facilities.

pdunn
@ 2005-10-05 11:26:53
Considering their entire nuclear program seems to be at the mercy of this river, I imagine the river's dams are a bit of a vulnerabillity to everything from their reactors to the reprocessing facilities.

Scavenger hunt time. I find it hard to beleive that a site of this value would have no SAM sites around it but I haven't found any. I guess they could be out further and thus not in the high res area.

I'm not sure what North Korean SAM sites look like so I guess I could have seen them but not recognized them. They could also be well hidden.

SA-2s have a nominal range of 27 NM, SA-3s are around 14 or so, and the SA-5 can, theoretically, reach out over 100 nm. Look between the facility and the greatest threat axis and within 25 NM of the facility and you should find the 2s and 3s. The SA-5s could be just about anywhere and still cover the site.

This site lists the "targets" in North Korea with missiles protecting them. Yong Bong is not one of the sites listed as having missiles.

Analogman
@ 2005-10-05 12:58:35
The North Koreans have had some problems maintaining their Soviet systems since the breakup of the USSR and the resulting lack of technical support. They don't have all that many functioning SAM sites as it is.