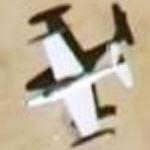 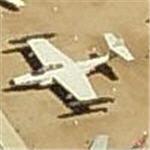 By kjfitz @ 2007-03-15 22:40:19
@ 33.884293, -117.266757
Riverside, California (CA), US
Nicknamed the “Flying Vacuum” because of its low slung jet intakes, the F-89 Scorpion would ingest any loose objects it crossed paths with on the runway. An attempt to place screens over the intakes failed when, at high altitudes, ice formed over the screens and caused the engines to flare out. Designed as an all weather ground attack fighter, the Scorpion was the first US interceptor armed with nuclear air-to-air missiles and the first aircraft to live fire an AIR-2 Genie nuclear air-to-air missile on 19 July 1957.

According to the Air Force Historical Research Agency (AFHRA/RSA), Maxwell AFB, AL, the museum’s F-89J has the following history:

The aircraft at the March Field Museum is a J model, serial number 52-1949. It was manufactured by Northrop and delivered to the Air Force on 24 November 1954. It served in the following locations:

May 1969 - Dropped from inventory by transfer to USN

In June, 1981, it was transported by truck to March AFB Museum. The nose radar equipment was removed and placed into a display case by former radar technician who was in the RAF during WWII. The display shows the many glass radio tubes in use at the time. This aircraft is on loan from the USAF.
Links: marchairmuseum.com
656 views