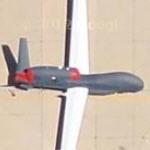 In role and operational design, the Global Hawk is similar to the Lockheed U-2, the venerable 1950s spy plane. It is a theater commander's asset to provide a broad overview and systematic target surveillance. For this purpose, the Global Hawk is able to provide high resolution synthetic aperture radar (SAR) – that can penetrate cloud-cover and sandstorms – and electro-optical/infrared (EO/IR) imagery at long range with long loiter times over target areas. It can survey as much as 40,000 square miles (103,600 square kilometers) of terrain a day.
Links: en.wikipedia.org
1,728 views