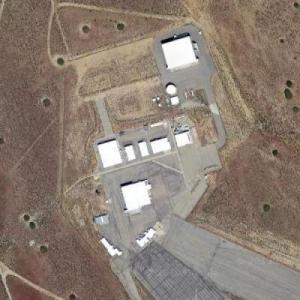 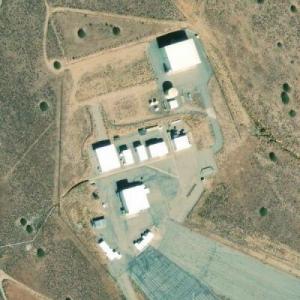 The Northrop facility is known as "The Tejon Ranch" and is sometimes referred to as "The Tehachapi Ranch" by UFO researchers.

It is located in the foothills of the Tehachapi mountains, at the mouth of Little Oak Canyon about 25 miles northwest of Lancaster, California. It is not under restricted airspace. Although the public is told that this is a cattle ranch, no livestock are visible anywhere on the property. UFO researcher Bill Hamilton says that if asked, Northrop Corporation will say that this is an "electromagnetic research facility."

There are large radar or microwave dishes and strange looking pylons to which objects can be fixed, for the purpose of beaming electromagnetic radiation at them. These pylons rise up from underground out of diamond-shaped openings in the middle of long, paved surfaces that resemble aircraft runways, but which are not used by any type of aircraft for landing or take-off.

It is thought that this facility goes down as many as 42 levels, and that tunnels link it to other nearby underground installations in the area.
Links: www.globalsecurity.org
7,239 views

its not as mysterious as you think. read this page and related links.

Anonymous
@ 2012-08-15 19:29:09
I've been there many times. Last time in the mid 90's. There is nothing more than a simple cattle fence around the facility, and YES, there were cattle there!
I've talked to people that were there during the construction and it'd curl your hair!
I could go on here...
There WAS a MacDonald Douglas facility that was very similar to the east of Northrop near the "town" of Llano. That appears to have been shut down. Been there several times.
One location that I've not visited, was Lockheed's Helendale facility with a similar setup.
I have a lot of personal in fo on the first two.

Anonymous
@ 2014-01-20 15:45:51
I live other side of Tehachapi & Cummings Mtn's from this facility. My son and I hiked the desert and Mtn's all the time and you can see this facility. We just never approached where not wanted, but not really no secret. Been testing Stealth for several decades there.

Anonymous
@ 2020-08-02 16:32:42
I have lived near it for 40 years. They poured concrete in that hole 24 hrs a day 7 days a week from 3 different concrete companys for 9 months.and believe me it's not closed. They are active and operating.there...no one is allowed within 1/2 mile armed guards tell you to leave..they seem to pop up from nowhere( possibly from underground portals...