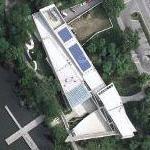 By kjfitz @ 2006-11-12 10:26:38
@ 41.926719, -87.635145
Chicago, Illinois (IL), US
The Peggy Notebaert Nature Museum is a nature museum located in Chicago, Illinois. The museum, which opened in October 1999, is located at the intersection of Fullerton Parkway and Cannon Drive in Lincoln Park. It is operated by the Chicago Academy of Sciences. The museum's exhibits include a display about the ecological history of the Illinois region, a live butterfly house, and a green home demonstration. The museum is named in honor of Peggy Notebaert, wife of Qwest Communications chairman and chief executive officer Richard Notebaert.
Links: en.wikipedia.org
823 views