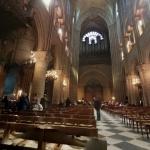 By kjfitz @ 2013-07-16 10:59:40
@ 48.853207, 2.349387
Paris, France (FR)
Notre-Dame de Paris, also known as Notre-Dame Cathedral or simply Notre-Dame, is a historic Roman Rite Catholic Marian cathedral on the eastern half of the Île de la Cité in the fourth arrondissement of Paris, France. The cathedral is widely considered to be one of the finest examples of French Gothic architecture and among the largest and most well-known church buildings in the world. The naturalism of its sculptures and stained glass are in contrast with earlier Romanesque architecture.
Links: en.wikipedia.org
498 views