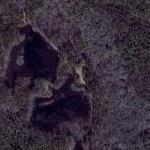 The two nuclear detonations were performed in a subterranean salt dome formation in Mississippi, as part of a 1960's Atomic Energy Commission Test. The test program, called Project Dribble, called for creating an underground cavity, using a nuclear bomb to do so, then later detonating a second nuclear device, as well as two gas explosives, inside the cavity. The purpose of the test was to measure the patterns of the shock waves generated by the explosions, to be better able to detect and calculate yields of similar underground tests that might be performed by the USSR. The first detonation, to form the cavity, code-named Salmon, took place in 1964 using a 5.3 kiloton bomb, placed at the bottom of a sealed 2,710 foot shaft. The second nuclear blast, a relatively small 0.38 kilotons yield shot code-named Sterling, was exploded within Salmon's 110 foot diameter cavity more than two years later. The two conventional explosives shots were performed in 1969 and 1970.
Links: gnn.tv
6,063 views