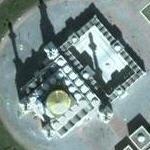 By kjfitz @ 2010-11-22 14:58:41
@ 51.126623, 71.415569
Astana, Kazakhstan (KZ)
The Nur-Astana Mosque, is a mosque located in the city of Astana, the capital of Kazakhstan. It is the largest mosque of Kazakhstan and the biggest mosque in Central Asia. The 40-meter height symbolizes the age of the Prophet Muhammad of when he received the revelations, and the height of the minarets is 63 meters, the age Muhammad was when he died.

The mosque is located at the left riverbank in the city of Astana, construction first started in March 2005. The mosque was a gift in accordance with the agreement of the Kazakhstan President, Nursultan Nazarbayev and the Emir of Qatar, Hamad bin Khalifa. It has a capacity of 5,000 worshippers inside the mosque, including 2,000 for worshippers outside the mosque. The structure is made of glass, concrete, granite and alucobond measures.
Links: en.wikipedia.org
695 views