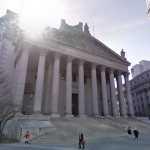 By giove @ 2010-01-28 10:12:05
@ 40.714709, -74.002385
New York, New York (NY), US
The Supreme Court of the State of New York is New York State's trial court, and is of general jurisdiction. There is a supreme court in each of New York State's 62 counties, although some smaller counties share judges with neighboring counties. All but the most populous counties are grouped into judicial districts from which the justices are elected, with unwritten agreements allotting the judgeships among the counties of the district.
Links: www.nycourts.gov
738 views