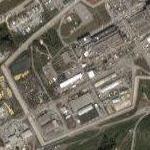 At Y-12, nine main processing buildings and over two hundred support buildings were constructed to house the process. The primary process used calutrons--large arrangements of electro-magnets which separated weapons grade U-235 out of naturally more abundant U-238. Because of the war time shortage of copper, 14,700 tons of silver from the U.S. Treasury were used in the calutron windings and associated electrical conductors. Y-12 employed 22,000 workers in the peak war years period, but the gaseous diffusion process at the K-25 Plant proved to be more effective for uranium enrichment and Y-12 was mothballed at the end of the war. Later the massive Y-12 facility became a nuclear weapons production facility and large scale lithium separation plant, a material critical to the hydrogen bomb.
Links: olive-drab.com
1,720 views