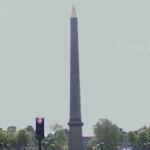 By kjfitz @ 2008-07-02 20:04:06
@ 48.866067, 2.319229
Paris, France (FR)
The center of the Place de la Concorde is occupied by a giant Egyptian obelisk decorated with hieroglyphics exalting the reign of the pharaoh Ramses II. It is one of two the Egyptian government gave to the French in the nineteenth century. The other one stayed in Egypt, too difficult and heavy to move to France with the technology at that time. In the 90's, President Mitterand gave the second obelisk back to the Egyptians.

The obelisk once marked the entrance to the Luxor Temple. The viceroy of Egypt, Mehemet Ali, offered the 3,300-year-old Luxor Obelisk to France in 1831. The obelisk arrived in Paris on December 21, 1833. Three years later, on October 25, 1836, King Louis-Philippe had it placed in the centre of Place de la Concorde, where a guillotine used to stand during the Revolution.

The red granite column rises 23 metres (75 ft) high, including the base, and weighs over 250 metric tons (280 ST). Given the technical limitations of the day, transporting it was no easy feat — on the pedestal are drawn diagrams explaining the machinery that were used for the transportation. The obelisk is flanked on both sides by fountains constructed at the time of its erection on the Place.

Missing its original cap, believed stolen in the 6th century BC, the government of France added a gold-leafed pyramid cap to the top of the obelisk in 1998.

Without warning, in 2000 French urban climber Alain "Spiderman" Robert, using only his bare hands and feet and with no safety devices, scaled the obelisk all the way to the top.
Links: en.wikipedia.org
949 views