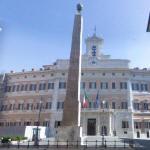 
The Italian Chamber of Deputies (Italian: Camera dei Deputati) is the lower house of the Parliament of Italy. It has 630 seats, a majority of which is controlled presently by supporters of the Silvio Berlusconi patriotic coalition People of Freedom.Twelve deputies represent Italian citizens outside of Italy. Deputies meet in the Palazzo Montecitorio. The current president is Gianfranco Fini, a leader of the People of Freedom party.