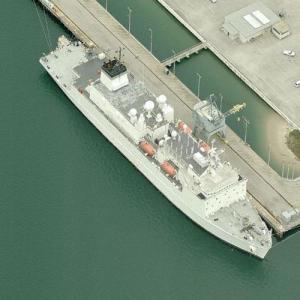 By kjfitz @ 2007-08-20 14:08:08
@ 28.41109458, -80.60483307
Cape Canaveral, Florida (FL), US
The USNS WATERS was acquired for multi-purpose surveys, and became operational at the end of FY1996. Built for the Military Sealift Command (MSC) at a cost of $104.4 million, the Waters replaced the USNS Mizar (T-AGOR 11). Mizar was special-mission ocean survey / "ocean engineering" ship which undertook a variety of covert "ocean engineering" missions in support of surveillance operations and the recovery of sunken hardware of interest to the intelligence community. Funding for that Waters's operations was reduced soon after her completion, and the ships was been converted to support additional missile range instrumentation and submarine navigation research support missions.