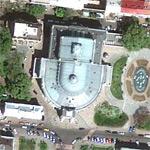 The first opera house was opened in 1810 and destroyed by fire in 1873. The modern building was constructed by Fellner and Helmer in neo-baroque style and opened in 1887. The luxorious hall follows rococo style. Its unique acoustics allows to deliver even a whisper from the stage to any part of the hall. The most recent renovation of the theater was completed in 2007.
Links: en.wikipedia.org
600 views