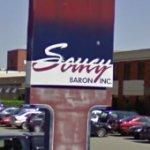 After production, the pucks are sent to the league's official supplier, InGlasCo in Sherbrooke, Quebec. InGlasCo stamps each puck with the necessary logos and distributes them to the individual teams.

Soucy Baron makes a wide variety of other molded rubber products, including gas masks for the US Army and engine mounts.
Links: www.soucybaron.com
2,293 views