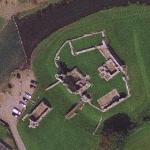 By Hinkkanen @ 2006-02-09 10:33:37
@ 51.480561, -3.611745
Ogmore-by-Sea, United Kingdom (GB)
Ogmore Castle, situated near the village of Ogmore, south of the town of Bridgend in Glamorgan, South Wales, was initially constructed soon after 1100 by William de Londres as part of the Norman invasion of Wales. The castle was in use until the 19th Century for a range of purposes, including a court of justice and a prison, but is now a substantial set of remains and local landmark. A popular set of stepping stones cross the river near to the castle site and a footpath leads to the village of Merthyr Mawr.
Links: www.castlewales.com
682 views