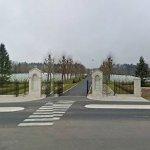 By WacoKidd110 @ 2012-08-04 07:28:56
@ 49.200864, 3.549297
Fère-en-Tardenois, France (FR)
The Oise-Aisne American Cemetery and Memorial is an American military cemetery in northern France. Plots A through D contains the graves of 6,012 American soldiers who died while fighting in this vicinity during World War I, 597 of which were not identified, as well as a monument for 241 Americans who were missing in action during battles in the same area and whose remains were never recovered. Included among the soldiers here who lost their lives is poet Joyce Kilmer.
Links: www.abmc.gov, virtualglobetrotting.com
386 views