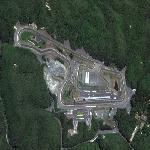 The track opened in 1990 as a private race track for the wealthy that wanted to drive cars around it. But later held its first race staged by veteran British drivers, Hobbs and Atwood, that later had corners named after them.