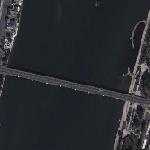 By Mike1989 @ 2013-02-27 11:03:11
@ 39.025168, 125.7617
Pyongyang, Democratic People's Republic of Korea (KP)
Okryu Bridge, also spelled Ongnyu Bridge, is a bridge on the Taedong River in Pyongyang, North Korea. Construction began in March 1958; the bridge was opened in August 1960. Located between the Rungra Bridge and Taedong Bridge, it is one of six Pyongyang bridges on the Taedong. It connects Chung-guyok on the Taedong's right (west) bank to Taedonggang-guyok on the left bank. The famous restaurant Okryugwan is near its right foot, while the Juche Tower is located just south of its left foot.
Links: en.wikipedia.org
671 views