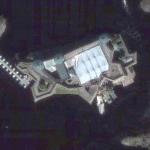 By Hinkkanen @ 2006-04-23 07:35:51
@ 61.864058, 28.900824
Savonlinna, Finland (FI)
St. Olaf's Castle, (Olavinlinna in Finnish and Olofsborg in Swedish) is a 15th century castle located in Savonlinna (Nyslott), Finland. It is the world's most northern Medieval stone castle. It was founded by Erik Axelsson Tott in 1475 as an effort to protect Savonia and control the unstable border between the Kingdom of Sweden and its Russian adversary. The castle has now three towers but originally there were five. The castle forms a spectacular stage for the Savonlinna Opera Festival, held annually in the summer under the great awning seen in the map.
Links: snor.joensuu.fi
938 views