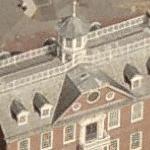 By kkeps @ 2008-11-07 04:40:49
@ 41.490251, -71.313008
Newport, Rhode Island (RI), US
The Newport Colony House is the fourth oldest statehouse still standing in the United States. It was designed by builder/architect Richard Munday, who also designed Trinity Church and the Seventh Day Baptist Meeting House in Newport.The Colony House was built between 1736 and 1739 by Benjamin Wyatt, and tradition maintains that a great number of African-Americans were employed in its construction.
Links: www.waymarking.com
615 views