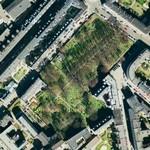 Future funerals took place, and still does, at the Vestre Jewish Cemetery the new cemetery which opened in 1870.

1940 it was closed for the public after the occupation of Nazi-Germany, it was opened again in the spring of 2010. Luckily it wasn't destroyed by the Germans