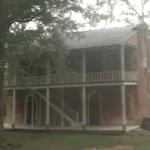 By kkeps @ 2008-11-09 10:41:50
@ 30.428433, -90.545504
Springfield, Louisiana (LA), US
Springfield was named as the Livingston Parish seat in 1835. The community was chosen for this honor because of its location on a navigable river, the primary mode of transportation in rural Louisiana during this era. The law implementing the decision dictated that a suitable courthouse be furnished without expense to the parish. Evidence suggests that S. G. Parsons, the parish sheriff, donated an appropriate building located within Square 6 of the community. Also in 1835, the New Orleans Gas Light and Banking Company chose Springfield as the site of its new bank, apparently the first in the parish. The company erected its new building within a few blocks from the courthouse in Square 12. However, the bank failed in 1843. At that time, the parish acquired the building, although whether it was donated or purchased outright is unclear. Thus, the former bank served as the Livingston Parish Courthouse from 1843 until 1872. As such, it was the center of the parish's civic and political activity throughout the years leading to Louisiana's secession from the Union in 1861, the difficult war years which followed, and for several years during the controversial Reconstruction era. The courthouse's most significant dispute during its period of service was the location of the parish seat. During the 1850s pressure mounted to move government personnel and records to a site near a newly completed railroad line. In 1860 the Legislature actually authorized an election to determine the question, but the Civil War temporarily tabled the issue. It quickly resurfaced after the war. An 1871 election verified the people's desire for a change, and in 1872 the Legislature approved the removal of the courthouse to Port Vincent.
Links: www.waymarking.com
953 views