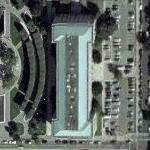 The architect for the Juvenile Court and the other two court buildings in the square - the Police Court (Court Building A) and the Municipal Court (Court Building B) - was Nathan C. Wyeth, Washington's municipal architect from 1934 to 1946. The first to be constructed was the Police Court, which was approved by Congress on May 6, 1935. Construction began in the fall of 1936 after the transfer from the federal government to the District of a 66-foot-wide strip of land along F Street (which included the roadway as well as the walks on either side). The land was needed to provide space for Wyeth's design, placed north of the Court of Appeals. Construction of the Juvenile and Municipal court buildings on the east side of Judiciary Square to mirror the Court of Appeals and the Police Court began in the fall of 1938.

The forms, materials, and scale of these courthouses matched the buildings across the square. The five court buildings and Pension Building (currently the National Building Museum) formed a campus-like quadrangle around the walks, trees, and flowers of the square and the San Martin statue at its center.
Links: www.dccourts.gov
575 views