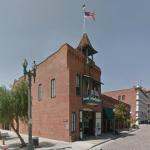 The building was restored in the 1950s and opened as a firefighting museum in 1960. The museum features helmets, photos, and firefighting equipment of the late 19th and early 20th centuries.
Links: en.wikipedia.org
440 views