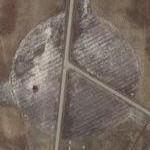 Very old airfields were large open spces, often round, that allowed a takeoff into the wind no matter the direction of the wind. I assume this must have really mattered in the underpowered trainers of the time.

In 1929, the U.S. Navy Air Station opened as a training school, seaplane base and dirigible hangar. The base operated until 1969, when it was closed and turned over to the Township in 1971 for operation as a general aviation airport.

The original runway was a unique circular design that afforded 3,000-foot all-way runways, which were lighted with flush, mounted lights.
Links: www.grosseileairport.com
892 views