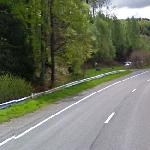 Designed in 1920 by Jules de Their and Henri Langlois Van Ophem, the original triangle-shaped course used public roads between the Belgian towns of Spa, Malmedy, and Stavelot. The track was intended to have hosted its inaugural race in August 1921, however this event had to be cancelled as there was only one entrant. The first car race was held at the circuit in 1922, and two years later saw the first running of the now famous 24 Hours of Francorchamps race. The circuit was first used for Grand Prix racing in 1925.

The old Spa circuit was essentially a speed course with drivers managing much higher average speeds than on other race tracks, a factor that made Spa very popular from its inception. Back then, the Belgians took pride in having a very fast circuit, and to improve average speeds, the former slow uphill U-turn at the bottom of the Eau Rouge creek valley, called the Ancienne Douane (until 1920, there was a German Empire customs office here[3]), was cut short with a faster sweep straight up the hill, called the Raidillon. Until 2000[citation needed], it was possible to travel over the race track when it was still a public road. At Eau Rouge, southbound traffic was allowed to use the famous uphill corner, while the opposite downhill traffic had to use the old road and U-turn behind the grand stands, rejoining the race track at the bottom of Eau Rouge.

The old race track continued through the now-straightened Kemmel curves to the highest part of the track, then went downhill into Les Combes, a fast, slightly banked downhill left-hander towards Burnenville, passing this village in a fast right hand sweep. Near Malmedy, the Masta straight began, which was only interrupted by the fast Masta Kink between farm houses before arriving at the town of Stavelot. Then the track blasted through an uphill straight section with a few kinks called La Carriere, going through 2 ultra-fast turns (an unnamed right-hand turn and then Blanchimont) before braking very hard for the La Source hairpin, and that rejoined the downhill start finish section as opposed to today where the start-finish section is before La Source.

Like the Nürburgring and Le Mans, Spa became notorious for fatal accidents, as there were many deaths each year at the ultra-fast track, especially at the 1960 Belgian Grand Prix where 2 drivers, Chris Bristow and Alan Stacey were both killed within 15 minutes (although Stacey's accident was caused by a bird hitting him in the face) and Stirling Moss had crashed at Burnenville during practice and was severely injured. When Armco crash barriers were added to the track in 1970, deaths became less frequent there but the track was still notorious for other factors. The Ardennes Forest had very unpredictable weather and there were parts where it was raining and the track was wet, and other parts where the sun was shining and the track was completely dry. This factor was a commonality on long circuits, but the weather at Spa was always more unpredictable than other long circuits, combined with the fact that it was an ultra-high speed track with all but 1 corner (La Source) being extremely high speed made it one of, if not the most dangerous race track in the world. Multiple fatalities during the 1973 and 1975 24 Hours of Spa touring car races more or less sealed the old circuit's fate, and by 1978, the last year Spa was in its original form, the only major races held there were the Belgian motorcycle Grand Prix and the Spa 24 Hours touring car race; the 1000km World Sportscar Championship race no longer took place after 1975 and did not come back until 1982.

In 1969, the Belgian Grand Prix was boycotted by F1 because of the extreme danger of Spa. There had been 10 racing fatalities in total at the track in the 1960s, including 5 in the 2 years previous. The drivers demanded changes made to Spa which were not possible on short notice, so the Belgian Grand Prix was dropped that year. Armco was added to the track and sections of it were improved (especially the Stavelot and Holowell sections), just like Armco had been added for the 1969 Le Mans race. One last race there the following year on the improved track was still not satisfactory enough (even after a temporary chicane was added at Malmedy just for that race) for the drivers in terms of safety, and even with the chicane, the drivers averaged 150+ mph (240 km/h) during the race. For the 1971 race, the track owners and authorities had not brought the track up to date with mandatory safety measures, and the race was cancelled. Formula One would not return to Spa until 1983 on the modern track.
Links: en.wikipedia.org
1,833 views