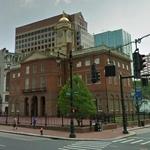 By Fab @ 2013-09-16 03:35:10
@ 41.765741, -72.673463
Hartford, Connecticut (CT), US
The Old State House (completed 1796) in Hartford, Connecticut is generally believed to have been designed by noted American architect Charles Bulfinch as his first public building. The State House is currently managed by the Office of Legislative Management of the Connecticut General Assembly. The exterior building and the Senate have been restored to its original Federal style; the Representative's chamber is Victorian, and the halls and courtroom are Colonial Revival.

It was declared a National Historic Landmark in 1960.
Links: en.wikipedia.org
432 views