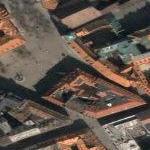 By kjfitz @ 2005-06-24 10:38:57
@ 48.143549, 17.108234
Bratislava, Slovakia (SK)
Adjoining the Main Square and serenading the old town with chimes from its bell tower, this amalgamation of architectural styles began to take form in the 14th century. Over the years it has hosted visiting royalty, contingents of Hussites, and served as the offices of city officials. Inside you will find a branch of the Municipal Museum as well as a small cinema, Muzeum, which often shows classic and international film club selections. The subtle exterior forms a pleasant eastern border to the square below.
727 views