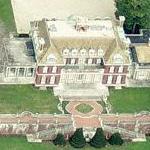 Scenes of the driveway were used in the 1970 film Love Story to depict the entrance to the home of Ryan O'Neal's character.

Other movies filmed on the grounds include North by Northwest, Age of Innocence, Wolf, Hitch, Cruel Intentions, 8MM, Bernard and Doris, American Gangster, and To Wong Foo, Thanks for Everything! Julie Newmar. Scenes from the television series, Royal Pains also used the location in filming
Links: en.wikipedia.org
4,523 views