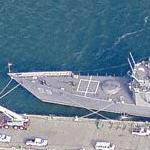 As of 2005, Kauffman is homeported at NS Norfolk, Virginia, and assigned to Destroyer Squadron 26.
Links: en.wikipedia.org
11,438 views