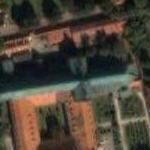 By kjfitz @ 2005-11-20 11:54:44
@ 54.410864, 18.558633
Gdansk, Poland (PL)
This Holy Trinity, Blessed Virgin Mary, and St Bernard's Church was first erected as a Cistercian shrine back in the 13th century. Reconstructed in 1350 after a great fire, it re-emerged in the Gothic style, but many of the new fixtures were to be relatively short lived. The Gothic interior was extremely damaged in a 1577 fire and was replaced with the Baroque fixtures we admire today for their beauty and intensity. Structurally, the cathedral is a triple-aisle, vaulted basilica built on the plan of the Latin cross. The Oliwa Cathedral is perhaps best known for its massive, yet splendid Organ. The organ is comprised of over 7,000 pipes and is decorated with movable angels and brightly painted stars. When built, the instrument was the largest in Europe. The main alter is also very impressive, but if the Organ is in use, you're sure to be rivited to its magnificent sound!
Links: www.local-life.com
774 views