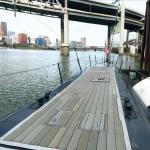 Blueback was laid down by Ingalls Shipbuilding Corporation of Pascagoula, Mississippi on 15 April 1957. She was launched on 16 May 1959 sponsored by Mrs. Kenmore McManes, wife of Rear Admiral McManes, and commissioned on 15 October 1959, Lieutenant Commander Robert H. Gautier in command. She was the last non-nuclear submarine to join the United States Navy and was the final conventionally powered combat capable submarine to be decommissioned, leaving the United States Navy with a fully nuclear submarine fleet except for the research submarine USS Dolphin (AGSS-555).

Blueback was decommissioned on 1 October 1990 and laid up in the Pacific Reserve Fleet in Bremerton, Washington. She was struck from the Naval Vessel Register on 30 October 1990. With her removal from service, the last fully war capable diesel-electric submarine of the United States Navy had left the fleet, leaving the research submarine USS Dolphin as the last diesel submarine of the US fleet.
Links: en.wikipedia.org
802 views