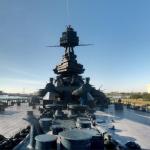 She escorted war convoys across the Atlantic, shelled Axis-held beaches for the North African campaign and the Normandy Landings, and provided naval gunfire support during the Battles of Iwo Jima and Okinawa.