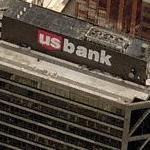 The 484 foot (148 m) building is topped by an antenna that raises the total building to 589 feet (180 m). In the 1990s the Ambassador Building next to it was razed and became part of the building's plaza.

The building has a Structural Expressionism style. It was originally built for Mercantile Bancorporation which was bought out by Firstar in 1999 and then became U.S. Bancorp in 2001.
Links: en.wikipedia.org
814 views