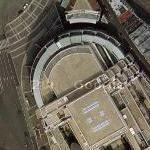 By kjfitz @ 2006-04-30 19:02:14
@ 48.852291, 2.3703
Paris, France (FR)
This is the new Opéra Bastille. Designed by the (then) little-known Canadian architect Carlos Ott and built in 1989, it is the newer and by far the larger of the two main opera houses in Paris. It takes its name from the place de la Bastille, which is the intersection in the foreground, and this intersection in turn was named after the Bastille prison of French revolutionary fame, on which I have more information elsewhere. The older opera house is the classic Opéra Garnier.

This opera house today hosts primarily grand, classic operas, such as Carmen (the world’s most popular opera), Tosca, or Rigoletto. It is a gigantic structure, covering a city block—nearly 30 stories, ten of which are below ground, and 22,000 square metres on each level. There are 45 km of corridors in this building! The opera theater itself (auditorium and stage) occupies only four percent of the building's volume, and seats a bit over 2700 people (large by opera standards, but still not very large in absolute terms). The rest of this cavernous edifice is dedicated to backstage areas, workshops, and all the infrastructure necessary to support world-class grand-opera productions.
Links: www.atkielski.com
878 views