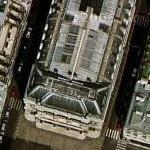 By kjfitz @ 2006-05-08 22:28:26
@ 48.871139, 2.337787
Paris, France (FR)
Opéra comique is a French style of opera that is a partial counterpart to the Italian opera buffa. Unlike opera buffa however, opéra comique generally uses spoken dialogue instead of recitative. Despite its name, it is not necessarily comic or light in nature.

The Opéra-Comique is an opera company and opera house in Paris. It is located Place Boieldieu, in the IIe arrondissement of Paris, near the Paris Stock Exchange and not far from the Opera Garnier, home of the Académie Royale de Musique.

The Opéra-Comique company was established in 1714 to offer French opera as an alternative to Italian opera that then dominated the continent. Productions at the Opéra-Comique distinguished from those at the Académie Royale de Musique by their less formal requirements. French opéra comique, in the 19th century at least, did not have to be comic; the term covered a much wider category of work.
Links: www.opera-comique.com
669 views