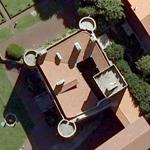 Its original construction dates back to the end of the 11th century, making it one of the oldest castles in Auvergne. Built around an inner courtyard, the living quarters were surrounded by five towers, three of which remain today.

In the 13th century a square keep replaced one of the corner towers.

The chateau was captured by the English in 1381 and freed in 1393 by Marshals Boucicaut and Sancerre.

In 1613 Antoine de Ribeyre, Treasurer of France, became the owner of Opme and carried out considerable works, respecting the style of the period. A main entrance and inside staircase were built and large windows with mullions were opened up, making the fortress, once to austere, brighter and more elegant. Finally the Ribeyres had two terraced gardens set out in the south, in the style of Le Nôfre, one with a large circular pond, and the other with a Renaissance fountain believed to be designed by Androuet du Cerceau. More recently, in 1940, General de Lattre de Tassigny, Marshal of France, stayed in the Chateau when he set up the Ecole des Cadres of Opme.

The castle and gardens were listed as historic monuments respectively in 1916 and 1969.
Links: www.route-chateaux-auvergne.org
532 views