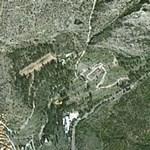 By DonMartini @ 2008-10-05 05:52:26
@ 38.481646, 22.499571
Delphi, Greece (GR)
Delphi is perhaps best-known for the oracle at the sanctuary that became dedicated to Apollo during the classical period. It had origins in prehistoric times and the worship of Gaia. In the last quarter of the 8th century BC there is a steady increase of artifacts found at the settlement site in Delphi. Pottery and bronze work as well as tripod dedications continue in a steady stream, in comparison to Olympia. Neither the range of objects nor the presence of prestigious dedications proves that Delphi was a focus of attention for worshipers of a wide range, but the strong representation of high value goods, found in no other mainland sanctuary, certainly encourages that view.

The priestess of the oracle at Delphi was known as the Pythia. Apollo spoke through his oracle, who had to be an older woman of blameless life chosen from among the peasants of the area. The sibyl or prophetess took the name Pythia and sat on a tripod seat over an opening in the earth. When Apollo slew Python, its body fell into this fissure, according to legend, and fumes arose from its decomposing body. Intoxicated by the vapors, the sibyl would fall into a trance, allowing Apollo to possess her spirit. In this state she prophesied. It has been postulated that a gas came out of this opening that is known to produce violent trances, though this theory remains debatable. The oracle spoke in riddles, which were interpreted by the priests of the temple, and people consulted her on everything from important matters of public policy to personal affairs.

H.W. Parke writes that the foundation of Delphi and its oracle took place before the times of recorded history and its origins are obscure, but dating to the worship of the Great Goddess, Gaia.

The Oracle exerted considerable influence throughout the Greek world, and she was consulted before all major undertakings: wars, the founding of colonies, and so forth. She also was respected by the semi-Hellenic countries around the Greek world, such as Lydia, Caria, and even Egypt.

For a list of some of the most noted oracular pronouncements of the Pythia, go to Famous Oracular Statements from Delphi.
The Oracle benefited by the Macedonian Kings. Later it was placed under the protection of the Aetolians. After a brief period the Romans started to emerge, who even protected it from a dangerous barbarian invasion in 109 B.C. and 105 B.C. A major reorganization was initiated which was interrupted by the wars of Mithridatic Wars and Sulla who took many rich offerings from the Oracle. Barbarian invasions were the direct cause of harm, burning the Temple, which was damaged severely by the earthquake in 83 B.C. Ever since the Oracle fell in decay and the whole area in great poverty. The small population led to difficulties in finding the right people to fill the posts required. Its credibility waned due to doubtful predictions. When Nero came to Greece in 66 A.D., he took away over 500 of the best statues from Delphi to Rome. Subsequent Roman emperors from the Flavian dynasty contributed significantly towards its restoration. Hadrian offered complete autonomy. Also Plutarch was a significant factor by his presence as a chief priest. However, barbarian raids during the reign of Marcus Aurelius and removal of statues and other riches (practically looting) by Constantine the Great caused it to decay. The short reign of Julian the Apostate was not capable to improve its situation. Despite this, the Oracle existed until it was ordered to close by emperor Theodosius I in 395 AD. The site was abandoned for almost 100 years, until Christians started to settle permanently in the area and established a small town about 600 AD by the name Kastri.
Links: en.wikipedia.org
1,181 views