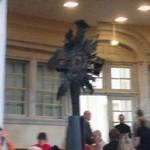 The new Cross was a gift from the British made by a goldsmith from London. When the church was rebuilt the old cross was placed in the church.
Links: en.wikipedia.org, de.wikipedia.org
349 views