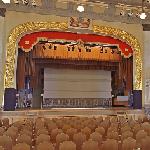 Among those beautiful buildings, the most eye-catching one is Osaka City Central Public Hall(Osaka-shi Chuo Kokaido), elegant Neo-Renaissance architecture with red brick wall and dome-shaped bronze roof. The graceful appearance looking even more beautiful on blue water and green trees has always been loved by many people.

The public hall was made with a large grant from an Osaka citizen, Mr. Einosuke Iwamoto who was a broker in Kitahama, Osaka. His donation was 1 million yen equivalent to billions yen in current monetary value. Einosuke had an opportunity to visit the United States as a member of businessman group and there he was impressed by the fact that American businessmen pay their own money to contribute to make great public halls like Carnegie Hall. Then he decided to construct one in Osaka which should be as beautiful as any hall in the world.
Links: osaka-chuokokaido.jp
367 views